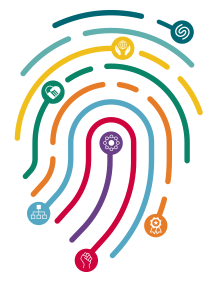 Based on the Spiral Dynamic value systems, this tool yields deeper insight into people's values, convictions and drives that form the basis for how we think, decide and act. By means of a questionnaire, ValueMatch determines which Value Systems a person favours (accepts) or rejects. The graph below shows an example of a personal Values Profile. The upper half shows the acceptance. In this example the person most favours the orange system, which reveals a preference for self-expression, a dedication to success, and rationality. The lower half of the graph shows the rejection. In this example the person most rejects the blue system, which may indicate an aversion to bureaucracy, to moralising behaviour and to strict hierarchies. Much energy can be lost fighting such rejections.

Often profiles are created for both individuals and teams; in that case, the grey lines indicate the team averages. This directly reveals the dynamics at play between the individual and the team. 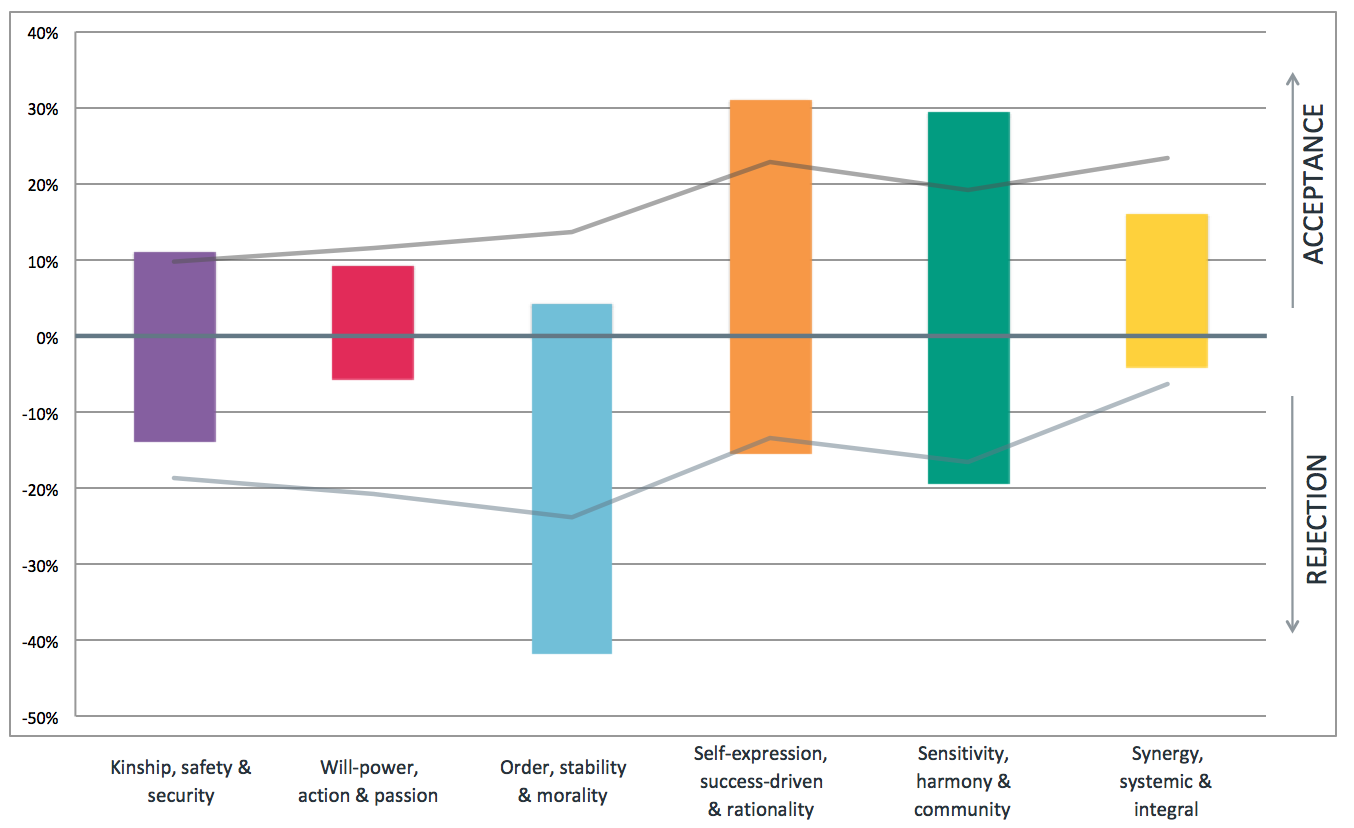 Aside from the Spiral Dynamics profiling graphs, ValueMatch incorporates the following aspects, which make it unique in the current market:

The research by professor Clare Graves shows that people under pressure are often driven by different values than when relaxed. For example, a manager who has a habit of seeking consensus for decision-making may under pressure become dominant and force through his own decision.

The development of new Value Systems in people generally starts at a cognitive level, before impacting their actions and behaviour. To make this visible, the ValueMatch questionnaires specifically query a person's ideal world, which reveals a person's aspiration. This aspiration either shows that they wish to explore new (or more complex) systems (green and yellow in the example below), or that they wish to integrate supporting value systems which are as yet underdeveloped.

These aspects generate a more dynamic view of a person or a team, which is a unique feature of the ValueMatch profiling tools.

In the first example graph above, we saw that the respondent's most important drives are orange (rationality, success-driven) and green (harmony and community-focused), with a strong rejection on blue (can concern different aspects such as laws, bureaucracy or dogmatic morality). The fact that the drive, when under pressure (second graph), shows a strong orange and, for aspiration, shows green and yellow (community and synergy-focused) could mean that orange is the most strongly developed and integrated system. However, the person might be happiest in an environment with clear green (community-focused) and yellow (seeing the world as a whole of interconnecting parts) qualities. This interpretation is only a possibility and needs to be validated by talking to the person and translating this to aspects of their daily life. The profiles help us formulate the right questions, but a conversation with the person is always necessary to validate our findings and to translate them into meaningful insights.

I and WE dimensions

The Value Systems can be differentiated into systems that are oriented on group-cohesion, and systems that focus more on self-expression. Often people's biography reveals a preference for one of the two, which may mean that the related Value Systems are more developed. In the example below there is a preference for the self-expression systems: red, orange and yellow. 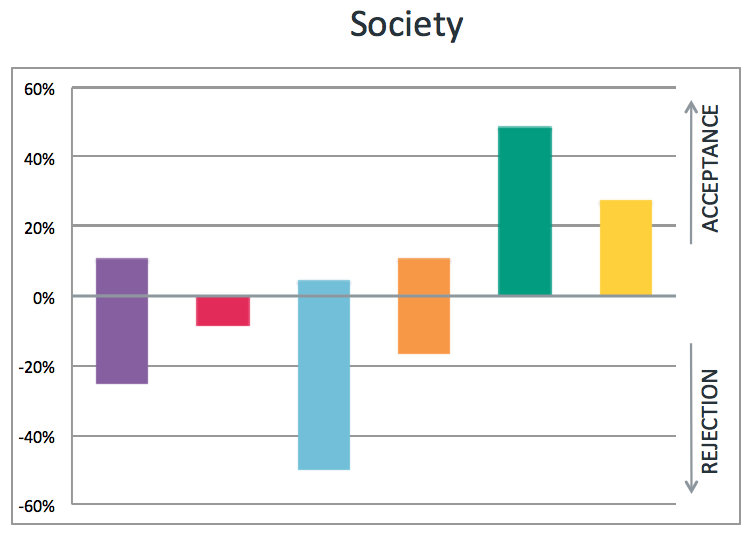 Finally, we provide an overview of personal characteristics (this is also created for group profiles). This is a selection of the answers with the highest scores and gives a quick overview of what is important for the person. As a common application of Spiral Dynamics profiling tools, ValueMatch can create group profiles based on the average of the group members. In our research we have additionally found it useful to create an extra overview of group members' first and second choice value systems. Per respondent we therefore determine the two highest scores in acceptance and rejection. A separate graph demonstrates how many people of the group have a certain value system as first choice or second choice (acceptance or rejection). This gives a quick insight into the group's primary drive and rejections and is a powerful insight in the qualities and pitfalls of the team, its strenghts, weaknesses and the risk factors. These profiles are also created for 'under pressure' and 'aspiration'.

In the example below, the graph printed in bold presents the first-choice value systems of the group members, and the lighter parts indicate the second choice. In this example, seven of group members have green as first choice, and three have green as second choice. Three have have blue as their primairy rejection and five reject red the most. Under pressure the group relies most on their green values and yellow is the strongest aspiration of the group. 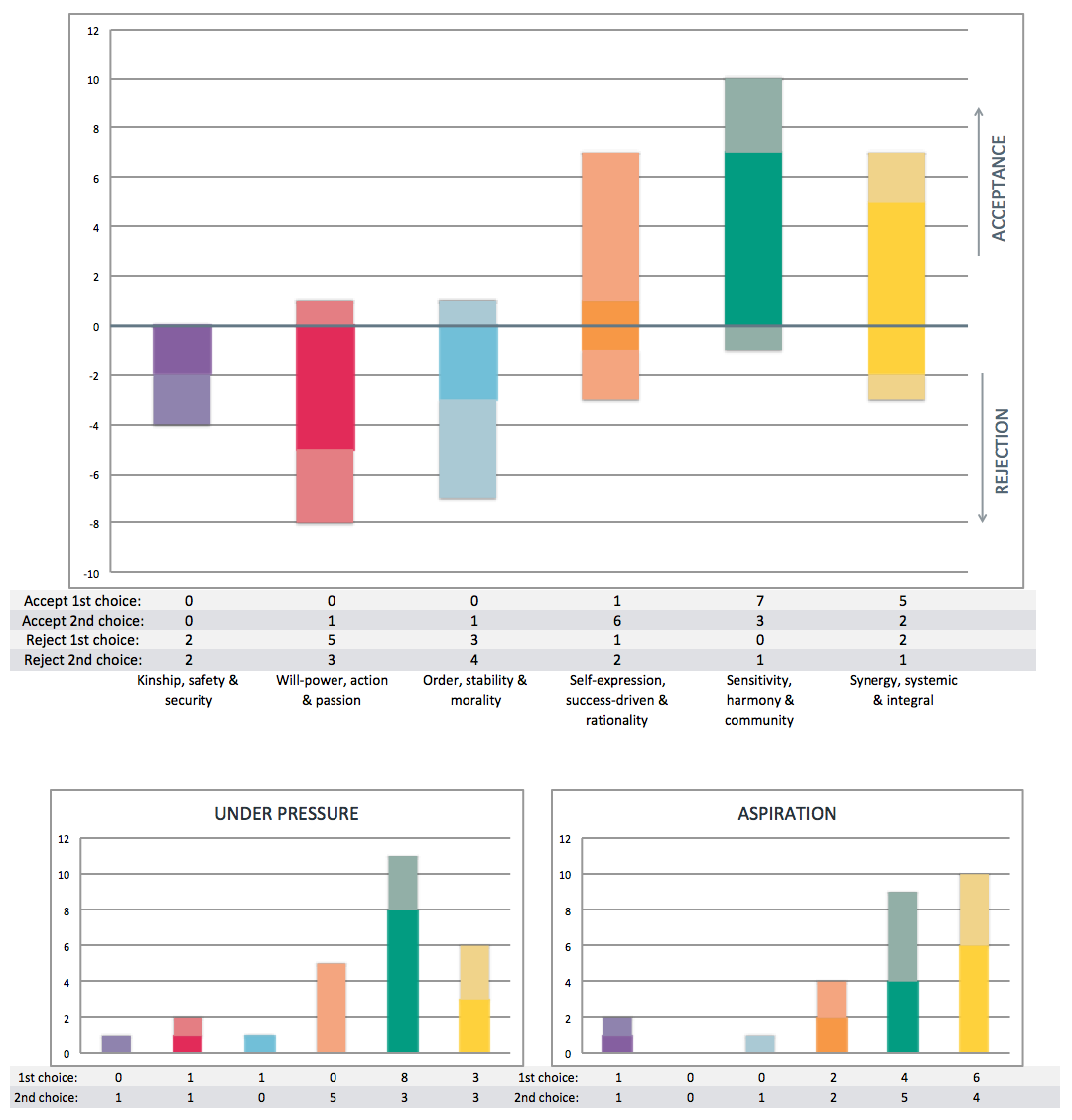